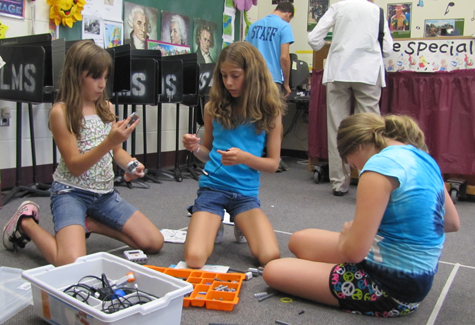 For the first time in two decades, Longwood School District is running a summer recreation camp that includes more than just sports.

In the past, kids could attend a summer camp that offered a variety of sports. It had long been the vision of history teacher Paul Infranco and physical education teacher James Castiglione, who are both in the booster club, to create a summer camp with much more. And due to recent cuts in programs in this school year’s budget, the duo knew now was the time.

“We wanted to give the community something more — something special the kids could enjoy and embrace,” Mr. Castiglione said in an interview during an arts and crafts class, speaking over noisy 7-year-olds painting masks and holding them up to their faces.

The booster club donated a minimal amount to cover start-up costs, and the instructors — Longwood teachers, students and alumni — earn wages that are “not tremendous amounts,” Mr. Castiglione said, to keep the camp affordable.

Twenty-one staff members oversee 95 kids in the camp, a number that ballooned after word spread and camp began. Less than 20 children were enrolled when the camp was first announced.

Andrew Earely, 11, of Coram said in between games of foosball that he didn’t go to camp last summer and instead stayed at home with his grandmother.

“There’s much more to do here than at home,” he said, noting that he’s had the most fun playing dodge ball and hockey. “And there’s more people to play with.”

“There are a lot of sports here and I love to play sports,” he said.

Currently, children ages 5 to 12 attend the camp, but Mr. Castiglione envisions expanding programs for kids up to age 18. Offerings, he said, could include journalism, radio, television, visual arts, engineering, architecture and digital photography.

He said children are already flourishing and benefiting from the camp.

“The impact on the kids has been the most rewarding,” he said.