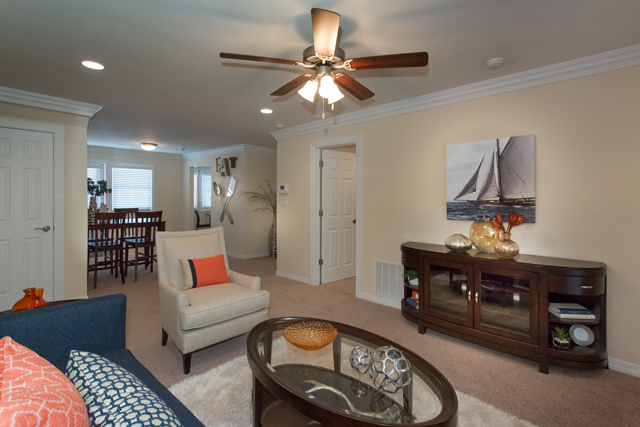 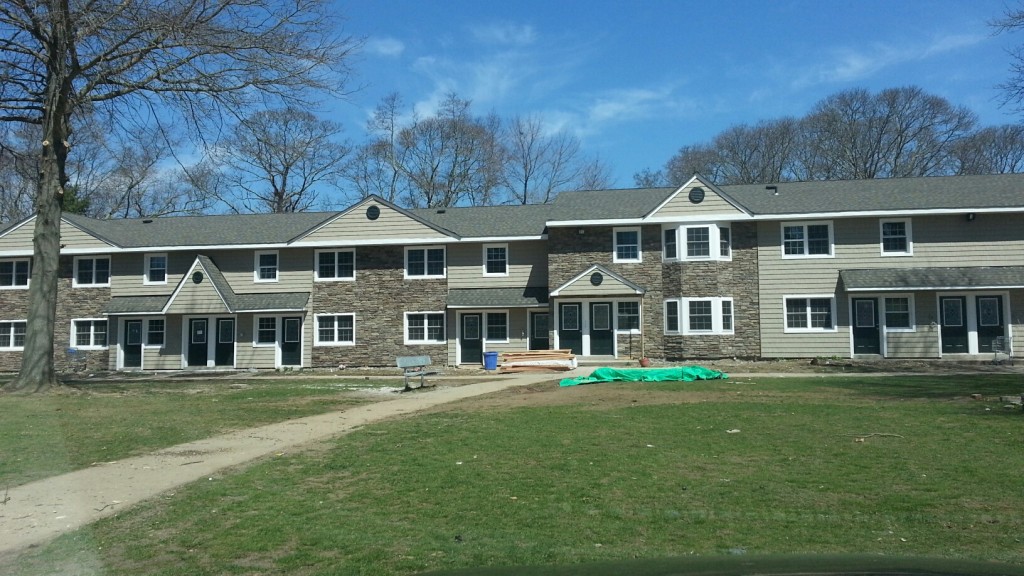 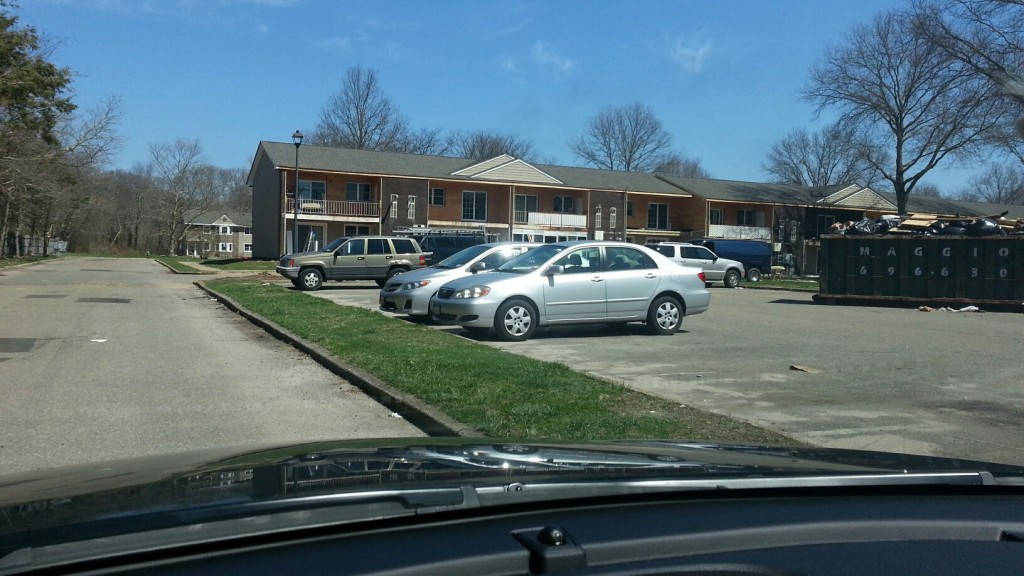 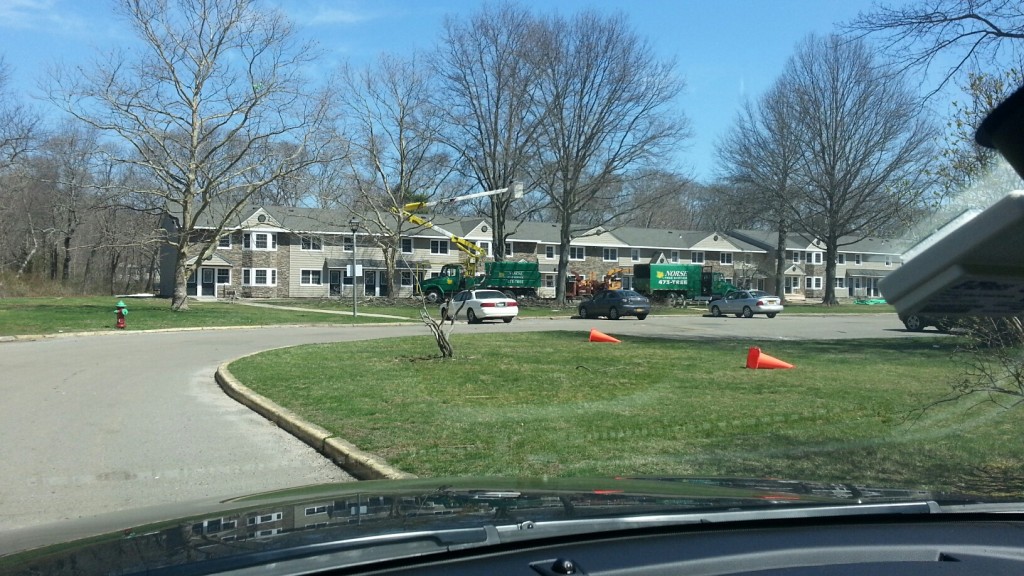 April Update:  Interior and exterior renovations are well underway under the new Fairfield ownership and management team.  The three largest buildings in the complex have undergone remarkable facade improvements, including new stonework, shingles, shutters, doors, roofs, facia and gutters.  The two smaller front buildings have yet to be fully renovated but  will be soon, and at least there are no more cars parked on the grass next to the residences!  MICA is looking forward to a presentation from the Fairfield group and its attorney Steven Losquadro at a civic meeting soon.  Photos of interior work have been supplied by the management team. Exterior photos are from arecent drive thru bu MICA prez Gail Lynch-Bailey. Not pictured is the mounding evidence of several recent evictions from the site: piles of personal belongings and furnishings at the corner of Rt 25 and Tudor Lane are sad testimony to the unfortunate side of these proceedings. 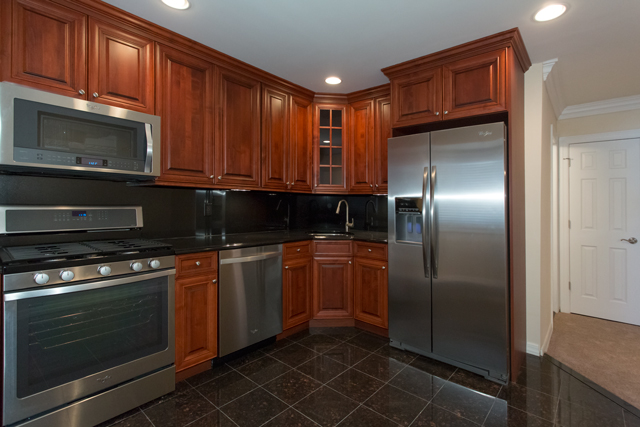 November Update: MICA has learned that the homeowners’ case against the auction ended Nov 12th after the lead rep in the case cut a deal for his own four units and dropped his opposition to the auction.  Workers for Fairfield MI LLC began repairing roofs at the site on November 18th;  some residents said they received no prior notice of this and other activitity.  When hot water was not functioning in Building Three, some feared this might be an eviction tactic. But this was immediately addressed by the new property owners, and as of midday Nov. 20th, all units have hot water back after Fairfield sent workmen on site to repair.

Because of a deadline clause in a letter sent to shareholders, the residents at Tudor Oaks initially thought they had only  until November 28th to leave the property. Some have already left and others have made plans to do so. Councilwoman Kepert explained that her office along with DSS and others are working to find people alternative housing, and the avenues they are using. It was also underscored that the time frame of 11 days — Fairfield’s letters were dated Nov 17th — is an onerous one, and that we do not want to see people put out on the street a day after Thanksgiving.

Steven Losquadro, attorney for Fairfield, explained that there actually is no set eviction date for residents, and that basically all residents have the opportunity to apply to live in the refurbished Fairfield units.  They must, of course, undergo credit, criminal, and sex offender background checks before being accepted.  (Exactly where accepted residents would live during the revitalization is unclear; perhaps at another Fairfield property nearby?) Losquadro stressed that all legal residents should contact one of the Fairfield Leasing agents named in the letter to discuss options and timelines.  These individuals are: David Berger, Director of Leasing, at 631-462-6060 and David Nobile, Director of Equity Management, at 631-499-6660, ext 265.

In an email to MICA President Gail Lynch-Bailey, Fairfield attorney Steven Losquadro further explained: Please be aware, as has been otherwise conveyed, that no occupant, even if he or she decides not to stay or contact Fairfield, would be evicted before Christmas.  If occupants do not contact Fairfield or apply to become a tenant of Fairfield, they will receive appropriate notice and then be served in January as holdover tenants in a landlord-tenant proceeding. However, as is quite clear, Fairfield has promptly reached out to all occupants to apprise them of the situation that exists at Tudor Oaks and encourage them to contact Fairfield to explore and pursue options available to them.

Apparently it was the Federal Bankruptcy Court Judge who established the process by which units would be surrendered, but it fell to new owners Fairfield to communicate these steps. That judge also created the two options for the shareholders who reside there. Option 1: shareholder leaves and is paid $7,500 minus maintenance fees owed in arrears. (One shareholder owed $16,000 in fees, so that may not be viable for the majority of those affected.) Option 2: subsidized rent of $600 per month for two years.

Fairfield plans to convert the former co-op community into upscale rental apartments and has already begun substantial improvements to the property. All potholes have been filled, roof repairs have been made, a complete landscaping clean-up has been completed,  a security system is in place, and lighting has been replaced and repaired, among other items.

It is not easy to ascertain the exact number of residents affected by the new ownership.  Many units were rented out by unscrupulous unit owners who allowed far too many residents per unit and made few if any repairs despite collecting monthly rents (One shareholder owned more than twenty units at Tudor Oaks but did not live there.)  In far too many cases, this led to deplorable living conditions, with only a few well-maintained and often owner-occupied units sprinkled throughout. Additionally, empty units were being occupied by squatters and, in several instances verified by the 7th Precinct, drug dealers and prostitutes.  It was these criminal activities and attendant gun fire that alerted outside residents to the problems at Tudor Oaks and resulted in the creation of the Tudor Oaks Task Force.

MICA has been particpating in this confidential task force all year.  We have also been monitoring the Tudor Oaks site, documenting violations and forwarding photos to appropriate enforcement officials.  We conducted two community walk-thrus there with public officials and held a community meeting at Longwood Middle School that was well attended by Tudor Oaks residents and those living nearby. Of paramount concern are the more than 50 children who reside in the troubled community, most of whom attend Longwood schools. This summer many were able to participate in a school-based summer program, and we hope that any relocations of these students and their families can be done within the Longwood district to maintain educational continuity. MICA will continue to work with the new owners and the current residents during this challenging transition period.  We look forward to the property becoming a vibrant and beautiful part of the Middle Island community once more. 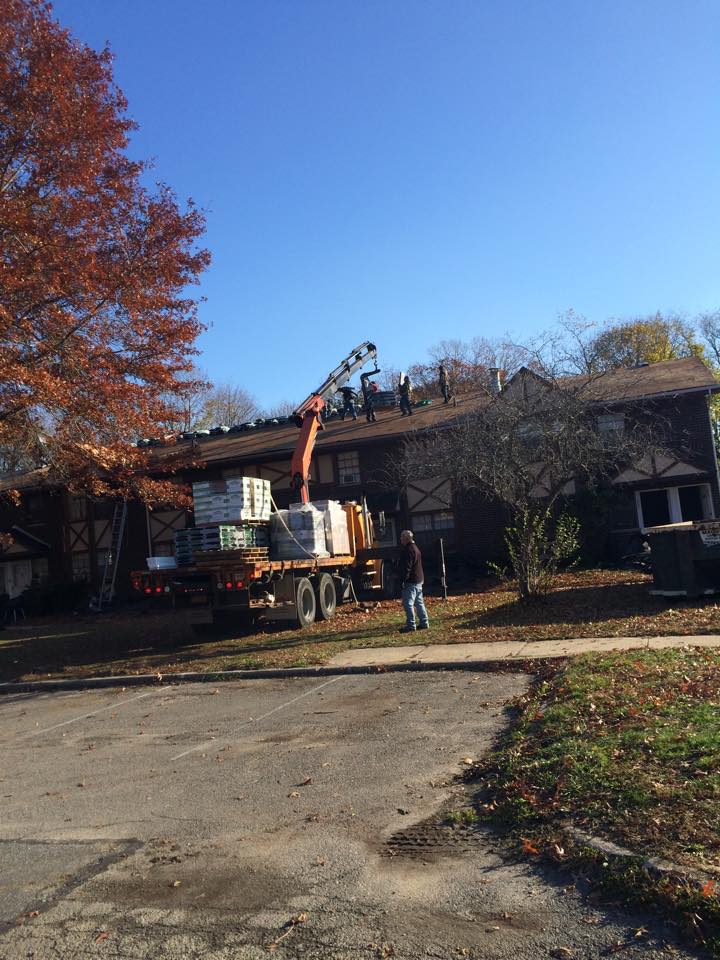 September Update: MICA has learned that Fairfield MI LLC is the winning bidder of this troubled coop community — reportedly for a total of $5.9 million. A group of coop owners is fighting the auction in court; the dates for these hearings were repeatedly postponed to accommodate the wedding of the bankruptcy trustee. November 12th was the last date MICA learned about for the owners’ case to be heard.

Days after the auction, sewage backed up and was fouling the sidewalks and grounds.  Residents contacted MICA. There is no STP on site. SC and TOB officials contacted the current management company, and a cesspool contractor was dispatched.

The SC Department of Social Services will be conducting a door-to-door survey of residents who may be displaced as a result of the auction.  Councilwoman Kepert is continuing to reach out to Fairfield in order to learn about their specific plans for the property. MICA continues to monitor and attend task force meetings. 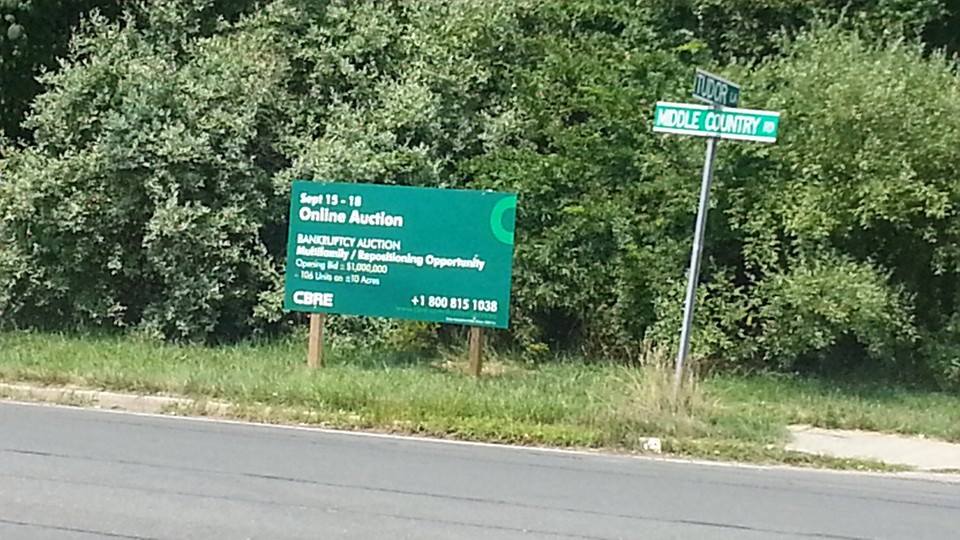 August Update: This sign for a Sep 15-18 online auction of the Tudor Oaks coop community appeared July 28th just west of the entrance on Rt 25. MICA did a second walk thru there with elected officials July 18th after the two fires. Unsure of what this latest development will ultimately mean for the many hard working residents who have invested their life savings and still have substantial mortgages on these coops. 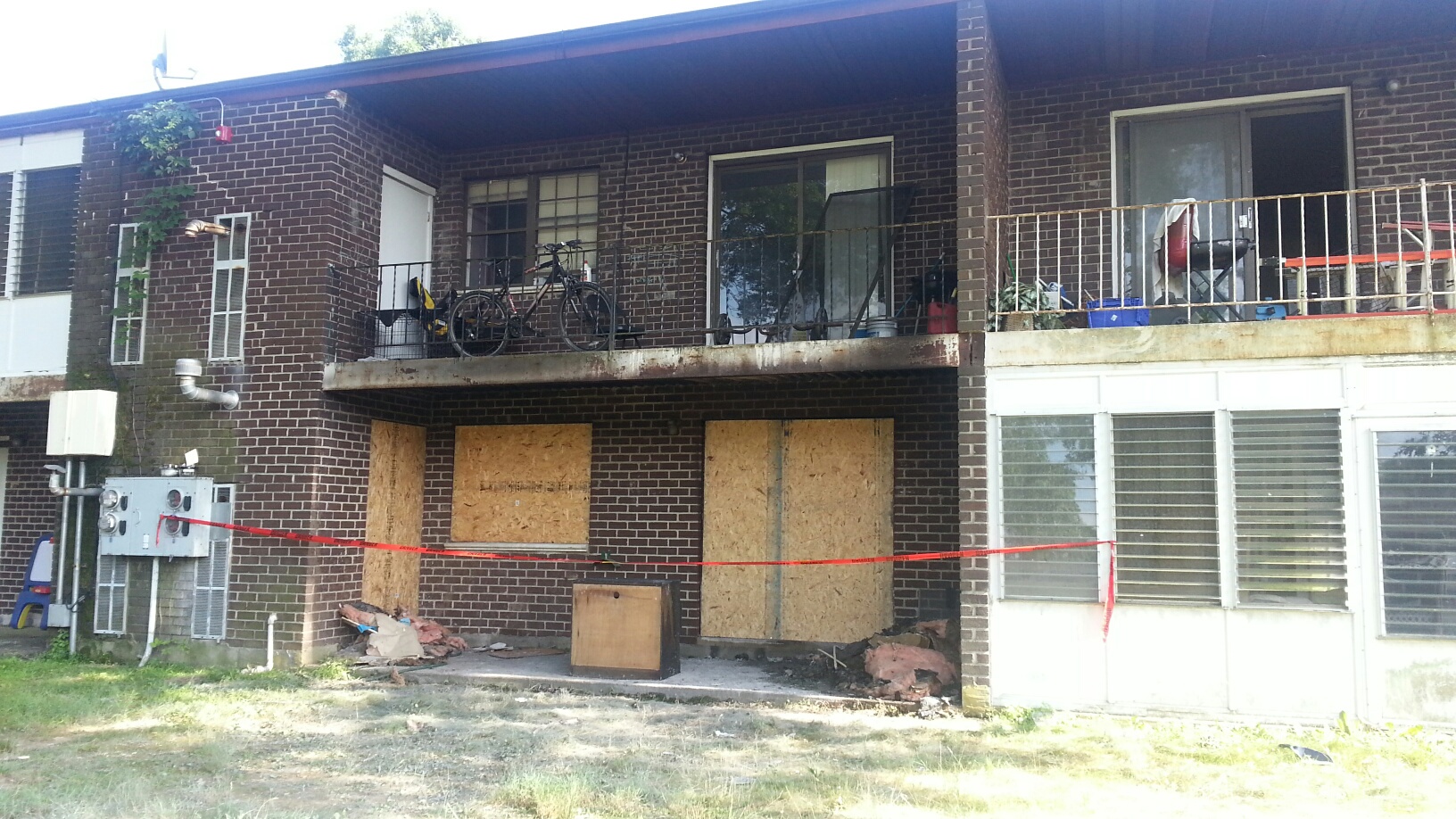 July Update: In response to the recent fires at Tudor Oaks: Glad that some of you have finally driven in to see what the Town, County, Civic, School District and others have been working on for months. The task force initiated by Councilwoman Kepert and Legislator Anker has worked closely with the SCPD to eliminate much of the crime that some of you read about here months ago: gunshots, drug deals, etc. This is a community facing multiple issues: bankruptcy/foreclosure proceedings, crime, and extreme maintenance negligence.

But it is also home to some wonderful people, who do indeed have pride and are very concerned about their situations. We know this because we met many of them while walking the community to invite them to the meeting held May 29. As mentioned earlier, that meeting was extremely well-attended and much info shared. We have been photographing violations, reporting them to the corresponding agencies and providing support to local residents.

Following the superb job done by our Middle Island Fire Department extinguishing the second blaze, the TOB Building Dept was there again this morning and Waste Management is going out there this afternoon. Waste Management has issued multiple violations and tickets to the management company to date- resulting in thousands of $$ in fines and have also gone in to do clean up efforts of our own and charged the cost of the clean up back to the management company. MICA also read the Fire Marshall’s initial report on those displaced by the most recent fire, which tracks where each unit’s occupants were sheltered after displacement. 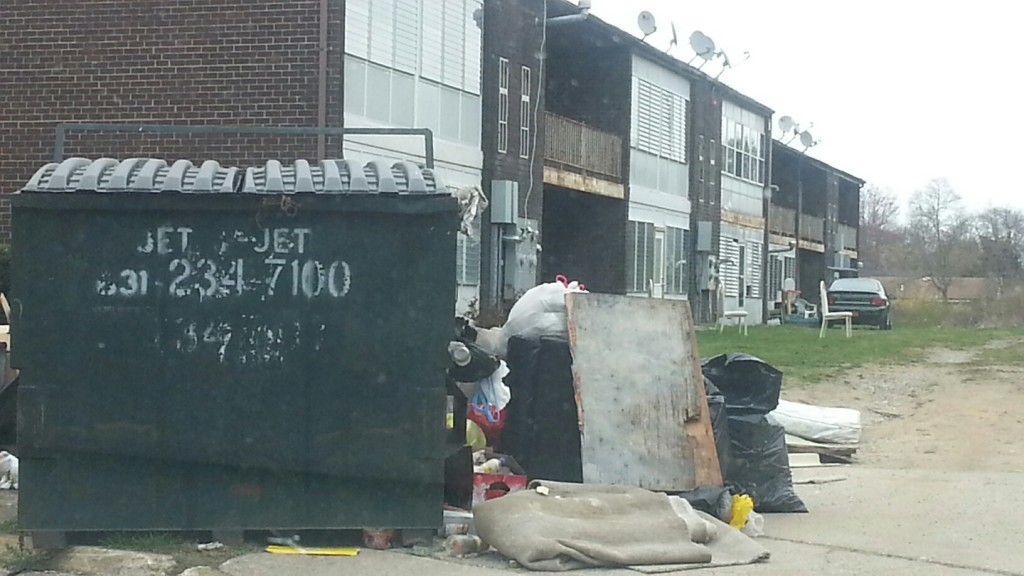