Affordability and open space are the allure in Middle Island 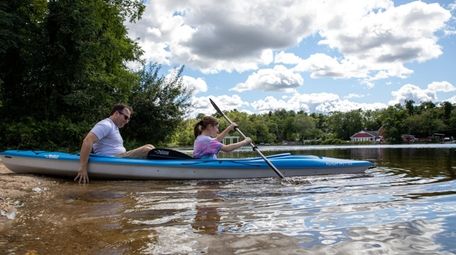 Aptly named for its location, Middle Island is about halfway between Montauk at the eastern end and the East River at the geographic western end of Long Island, and midway between the Long Island Sound to the north and the Atlantic Ocean to the south.

Most homes in Middle Island are Colonials and ranches, which fit both the needs of growing families and those looking to downsize to single-level living, says Angela Wahidi, a real estate agent with Voro Real Estate.

The affordability and space are big draws, says James Hogan, a real estate agent with EXP Realty. “The amount of land and privacy you can get out there, as opposed to western Suffolk County, you can get an additional 1,500 square feet and another half-acre,” says Hogan. “And your taxes are lower.”

Last year, a 9.9-acre wooded tract known as Pine Lake was saved from development after Suffolk County and Brookhaven Town purchased it to preserve it as open space.

The hamlet offers mom-and-pop shopping and restaurants, and is an easy drive to Patchogue and Port Jefferson. But several former large retail sites, including the old Kmart, have yet to be redeveloped, notes Gail Lynch-Bailey, president of the Middle Island Civic Association, adding that residents were happy to see the long-awaited repaving of Route 25 completed in the spring.

Middle Island boasts several public and private golf courses and parks, including Bartlett Pond Park, which has a war memorial honoring veterans dating from the American Revolution. This Memorial Day, Albert Freeman, a Black Union soldier, was added to the list of Middle Islanders who died serving in the Civil War. Adjacent to Cathedral Pines County Park is Prosser Pines Nature Preserve, which feautres a stand of white pine trees planted in 1812.

There are plenty of lakes, ponds and hills to enjoy in the hamlet. Says Hogan, “It’s a nice change of pace esthetically for Long Islanders and New York City residents.”

*Based on 47 sales in the past six months, according to OneKey MLS

NOW ON THE MARKET

Built in 1973, this five-bedroom, two-bath 1,850-square-foot high ranch has been completely renovated. It has hardwood floors and stainless steel appliances and white cabinetry in the kitchen. The home sits on a 0.43-acre lot that has a flat backyard bordered by large trees. Taxes are $9,230. Angela Wahidi, Voro Real Estate, 877-943-8676.