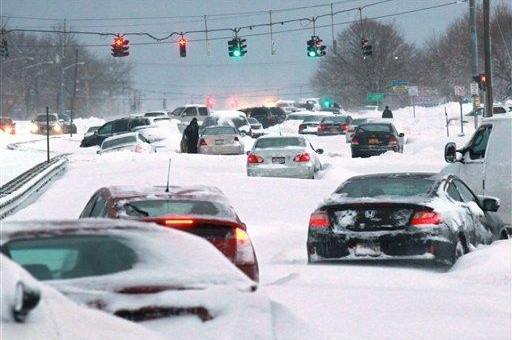 By The Associated Press

In Middle Island, Walmart remained unofficially open long past midnight as it welcomed people who couldn’t get home.

“We’re here to mind the store, but we can’t let people freeze out there,” said manager Jerry Greek, who had closed the store at 6 p.m., four hours earlier than normal.

As the major roadways were shut down, motorists were stranded for hours on secondary roads, including the portion of Middle Country Road right by Walmart.

Jeanne Miller, 50, sat in her car for seven hours — four of them stuck in the jam on Middle Country Road in front of Walmart.

She was one of more than two dozen people who went into the store to use the facilities, buy dry clothes and snacks and wait out the blizzard, chatting with strangers about how they all got stuck.

It took Miller three hours to get from her job in Commack to Middle Island, and she was just two miles from home when she encountered the snow snarl on Middle Country Road.

“There were cars everywhere,” said Miller, who had gotten wet repeatedly clearing snow from her car while she sat in the jam. “The snow was coming down too fast and no plows were able to come through, and we were just stranded for hours and hours.”

More than a dozen Walmart employees also were stranded and, not long before midnight, they were helping a girl, 5, and a boy, 10, both passengers in a minischool bus that had been stuck in front of the store for hours.

Pharmacy manager Theresa Sowinski said she ran around getting dry clothes off the racks for the two.

At one point, the girl asked her a question, she recounted: “She looked at me and said ‘Is this your house?’ My heart was broken. They were very frightened . . . They were in the bus for four or five hours.”

By 11 p.m., a fire department vehicle arrived to take them home, she said, but the school bus driver and the children had to walk across the parking lot’s deep snow to Middle Country Road to get to the rescuers.

Sowinski said cots have been set up in the pharmacy area for employees.

Although the store officially closed early, the pharmacy manager said, it was too late to venture home safely: “There was no getting out . . . I didn’t realize it would be as bad as it was, and I’m glad we’re all here and safe.”