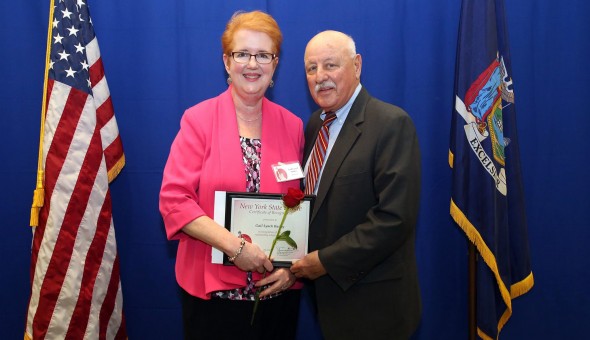 “Gail Lynch Bailey’s dedication and commitment to community is exemplary.  Her countless hours of involvement and generous volunteering of her time have made many positive impacts that will last generations.” Said Senator LaValle. He continued “ Gail Lynch Bailey joins the ranks of notable women in New York State who have been selected for this special recognition.”

Mrs. Bailey began her volunteerism in the community as a Cub Scout den leader in 1989, a youth soccer mom and PTA volunteer at West Middle Island Elementary School. She was an integral force in the passage of bond votes to upgrade and expand school district facilities. Gail progressed through various PTAs as her sons were promoted through the schools. Gail served as president of the Longwood PTA Council. In addition, she served as president of both the nonprofit Longwood Alliance and of the Middle Island Civic Association.

Her determination and hard work were once again illustrated as she worked towards the creation of the Veterans’ Memorial project at Bartlett Pond Park. The park honors all of the veterans of the Longwood community, dating back to the Revolutionary War.

The Town of Brookhaven recognized Gail in 2010 as “Woman of the Year” for all of her outstanding civic achievements. In 2011, Gail Lynch-Bailey received the Carl Verdi Community Pride Award from the Longwood Central School District’s Board of Education based on her efforts “building lasting bridges” between the school district and community.

The Senate’s “Women of Distinction” program was created to honor New York women who exemplify personal excellence or whose professional achievements or acts of courage, selflessness, integrity or perseverance serve as an example to all New Yorkers.  Women from the worlds of business, academics, and civic life, as well as those who have performed heroic or selfless acts, made significant discoveries, or provided examples of personal excellence against difficult odds have been honored at the annual event.