From The North Shore Sun By Jennifer Gustavson | September 21, 2011 in 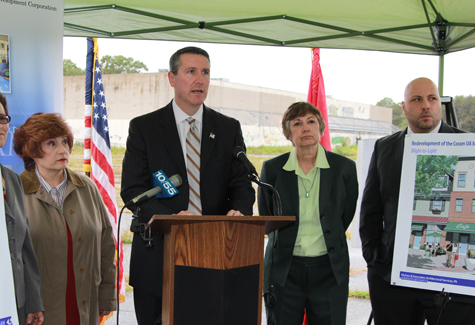 Brookhaven Town officials announced Tuesday that a developer has submitted a plan to build 160 affordable apartments and 48,000 square feet of commercial space at the former United Artists Movie Theater property in Coram in hopes of attracting students to move there.

The $59 million redevelopment of the nearly 18-acre lot, located near the intersection of Route 112 and Middle Country Road, will create about 320 construction jobs and would provide nearly 110 permanent jobs, Brookhaven Town Supervisor Mark Lesko said during a press conference at the property.

“This is what our young people want,” Mr. Lesko said of the plan, adding that he believes students attending Stony Brook University will be interested in moving into the development because of its location and pedestrian-friendly design, as well as its affordability.

The apartment complex will include one, two and three-bedroom apartments ranging in price from $1,170 to $1,620, he said.

Mr. Lesko said CDM, the engineering consulting firm that created the plan jointly with developer Conifer Realty, completed a market analysis during the planning process and it concluded that a mix of restaurants, retail and office space would be profitable in the economically stressed area because it would be developed into a downtown center.

In addition to housing and retail, the plan includes extending Mill Road in order to ease traffic congestion and bike paths and sidewalks. It also includes preserving two acres as open space.

Mr. Lesko, along with 4th District Councilwoman Connie Kepert, Middle Island Civic Assocation president Tom Talbot and Coram Civic Association president Erma Gluck said they were exicited about the plan because they have been asking that the defunct movie theater be redeveloped for over a decade.

“We all got together in 2002 and this is what we envisioned for this site,” Ms. Gluck said about the project.

Mold, formed after a pipe burst several years ago, fills the 10-theater multiplex, where the local homeless have been known to squat in the winter. Graffiti line the walls inside and out.

Over the years, it has become a hangout for vagrants and homeless people who have been living in the surrounding woods. When Northshoresun.com inquired about the homeless situation in May, Suffolk County Police said an officer was sent to the theater and a man found inside the building was arrested for trespassing. Within the past year, there has been one second-degree harassment and two petit larceny incidents reported at the location, police said.

The county and police department have said they are continuing to hand out fliers with shelter information to people found at the shuttered theater, as well as at camps found in the woods.

While the police help the homeless get off the streets and into shelters, officers cannot force them to go — even in colder months.

Mr. Lesko said the town is continuing to work with other municipalities to deal with the homeless issue as the project moves forward.

An aspect of the planning process that has already been completed is a sewer feasibility study.

The study has determined the that the sewage treatment plant at the nearby Bretton Woods condominiums is capable of handling the new development’s waste water, a representative for CDM, the engineering consulting firm that created the plan jointly with Conifer Realty.

Mr. Lesko said the developer’s application request to upzone the property from J2 and J6 to Multi-Family in order to create higher density will be fast-tracked since the site is listed as a monument of blight under his Blight to Light program.

The Blight to Light program aims at reducing the number of abandoned commercial properties in the town by offering builders tax incentives and an expedited approval process to develop walkable mixed-use communities.

It is the second plan to qualify for the Blight to Light incentives. The first was announced earlier this summer for the redevelopment of a former car dealership in Port Jefferson.

Ms. Kepert, who represents a portion of Coram, said the Blight to Light program helped to “spark interest in redeveloping the site” and is pleased with the project because it conforms to the town’s 2006 Middle Country Road Land Use Plan.

“It took a very long time to get to this point,” she said. “This plan will create an attractive place for people to live, work and play.”